Neuschwanstein and the Swan Prince 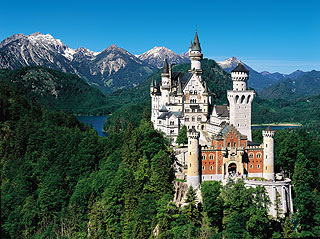 Neuschwanstein Castle, built in the isolated mountains of Bavaria, Germany, is a castle of dreams. One man's dreams, actually. Ludwig II commissioned the palace in 1868 with the aspiration for it "to be a better recreation of an ideal medieval castle than Hohenschwangau" (Hohenschwangau was the renovated Schwanstein castle in Crown Prince Maximilian II of Bavaria had rebuilt in 1832, a favorite retreat of the young Ludwig). As shown through the concept sketch below, he envisioned a castle worthy of the German knights. 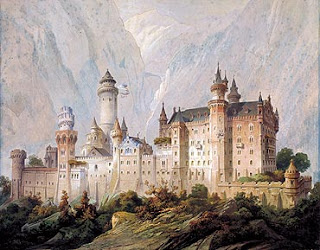 no need to tell this guy to keep his standards high...
Furthermore, he wished the inside to be a veritable homage to Wagner, filled with images straight from his operas "Tannhäuser" and "Lohengrin," as evidenced by the swan imagery in the photo below. 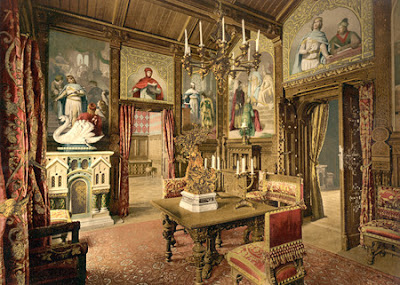 Hohenschwangau was also decorated with swans and imagery from Lohengrin, and from an early age, Ludwig began to identify himself with the Arthurian hero, the son of Percival, who in a boat towed by swans, becomes the Grail King through his purity and faith. Ludwig was always a dreamer of sorts. In 1864, he inherited the throne at the age of 18. He had virtually no life experience, not to mention political experience. The women, however, loved the imaginative, poetic new king. Big surprise.... 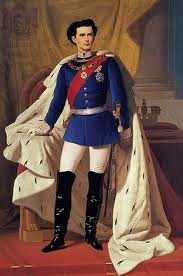 those legs...
Regardless of his deficiencies, Verlaine dubbed Ludwig II the "only true king of this century." Ludwig aspired to embody this distinction; however, after the Franco-Prussian war, ending with King Wilhelm as Kaiser of unified Germany, Ludwig retained virtually no power. the original Nelson Mandela?
"He was a constitutional monarch, a head of state with rights and duties and little freedom of action. For this reason he built a fantasy world around him in which – far removed from reality – he could feel he was a real king. From 1875 on he lived at night and slept during the day." (taken from http://www.neuschwanstein.de/englisch/ludwig/biography.htm). Contrary to popular belief, he funded the majority of the construction himself, even accepting secret loans from Otto Von Bismark in exchange for his support. Yet, the costs of the ever- growing Neuschwanstein far exceeded the original expectations. As various modern appliances were installed, prices soared. Conveniences include:
(Taken from http://www.neuschwanstein.de/englisch/palace/interior.htm)

As his debts exceeded 14 million marks, his creditors began to grow anxious. In 1885, foreign banks tried to seize his property. Ludwig's inability to confront reality led to his eventual deposition in 1886 on the grounds of insanity. Whether he was actually insane or not remains to be seen. he was never actually medically examined and died with his of mysterious causes the next day along with the psychiatrist who had certified him as insane.

Though unfinished (it should have had 200 rooms but only sports 15), Neuschwanstein opened about 7 weeks later to the public. As people continually make the trek to its obscured location, it remains a wildly popular tourist attraction with over 1.3 million visitors per year. 60 years ago, a certain animator dropped by. Notice any resemblance to Sleeping Beauty's castle in Disneyland? 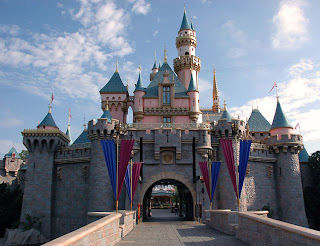 Check out the webcam!

R. H. Null
As I continue to unearth amazing facts and stories that weren't covered in my public school education, I've decided to share them for the benefit of imagination, creation, and discovery avast.